I had a feeling the announcement was coming. Those little inklings had been skittering over the surface of my mind for weeks, but I had hoped I was wrong, and was still totally unprepared for the jolt of hurt and betrayal that shot through the center of my chest in that moment. A colleague had been promoted, and while she did good work and it was not undeserved, I felt my job had demanded more of me, and it seemed unfair. Really unfair, actually, and I lost my mind with jealousy.

There’s more to it, of course.

I had just turned 29, and truthfully, I never thought I would still be working at that age. I recklessly assumed that I would be home raising a family by then. Even while evidence mounted that I may need to let go of that dream, I managed to convince myself every month that it was right around the corner, and somehow, it still seemed like an enormous loss each month to find out that it wasn’t so.

I didn’t realize, back then, the extent to which my personal and professional hopes and disappointments collided in my mind and heart. Personally, I felt nowhere near where I wanted to be, and I was relying on the professional side of my life to make me feel like I had a purpose, like I was moving forward, like I was doing okay. I had successfully navigated several major projects, and a newer, bigger, shinier one was just ramping up. I figured that could be “my thing.” That could be the thing I held out to the world to justify my place in it. I don’t know how I built it up so much in my head, but all of a sudden, I looked around and I had nothing. I felt lost, and foolish, and wondered how I had been so naïve. I felt like a failure in every way.

Then I carried that feeling with me for five years.

Why had I let that be a defining moment in my life? It sounds so crazy when I phrase it like that. We all do it, though. Things happen, and those things are real and true, but then we build entire paradigms around them that aren’t. We take a fact, or a circumstance, or something someone said, and we bubble wrap it in layer after layer of interpretation and assumption, and our own version of the story, until the set of beliefs we’re holding no longer resembles reality.

We often talk about “belief” in the context of faith, but our set of beliefs is made up of everything that we use to explain the world. Most of them are subconscious, and we’ve never put words to them, but they’re governing our thoughts and actions nonetheless, so if we’re believing something about ourselves, other people, or our role in the world that is untrue, we’re acting out of that untruth.

I felt like a failure because I grew up believing you could either be a family woman or a career woman, and since I couldn’t make the family woman role happen, I thought my only option was to be a career woman. Then, when I experienced disappointment in the career space, I took on the belief that I was a zero. I cringe as I write that because I know it’s not true. It’s not true on either end of the spectrum! It’s not true for the working moms who feel spread thin, and it’s not true for me. Still, I was so buried in disappointment at the time that it felt true, and since I never acknowledged it, it just stayed in the undercurrent of my life for years.

They say if you don’t learn a lesson the first time, life will arrange for you to try again. I’d eventually received the coveted promotion, and a few years later, went for another. The morning of my interview, I found out that our most recent fertility treatment had failed.

I had let myself hope. For a brief moment, in the days leading up to that, I wondered if in the end, perhaps I could have it all. Then, I sat in the same conference room as five years prior, and I could tell they were letting me down easy, and I thought about all of the failed treatments, everything sacrificed at home and at work, and once again, it all came to nothing.

When I was very young, I went to a friend’s birthday party and got stuck in a ball pit. I don’t remember the mechanics of how, but it was like I was “floating” and couldn’t get my feet to touch the bottom. It was time to get out, and my friend’s dad was yelling at me, and I’m sure he thought I was just being rebellious, but I was trapped.

That’s what it felt like to think that the way forward should be so obvious, but I just couldn’t make it happen: Claustrophobic, antsy and unsettled, as if I were somewhere I didn’t belong and didn’t know the way out. I was still waiting for something, anything, to prove that I wasn’t wasting the years, and the lack of results made me feel small, pathetic, and stuck.

So at first it was hard, but here’s the thing: Being back to “zero” freed me. Eventually. It put this dichotomy between “family woman” and “career woman” so blatantly in-my-face that I couldn’t ignore it, and apparently I needed that. It was actually a beautiful story in its own way because it led to a new level of understanding, and somehow, joy cracked through the hard exterior of disappointment. It reoriented me. It forced me to question thought patterns that I had never put words to.

I began to realize that what I really wanted out of my work – regardless of why I was there – had less to do with title and pay, and way more to do with trust, respect, communication and connection. Titles and paychecks are nice, but they’re not the currency of the things that matter to me—joy, peace, purpose. To have those, I needed to let go of pre-defined roles. I needed to find a new way to be.

We have such high expectations for ourselves, and for life, and for how life will feel to us. We take things that were never meant to be a verdict on our lives, and we let them define us, or reinforce our doubts and insecurities, or our frustrations and disappointments, depending on whether we internalize or externalize.

What I learned was that I needed to intentionally listen to the story line in my head. We all need to do that, and we need to be bold enough to change the story when needed. Maybe that means a tweak in perspective, maybe it means flipping the script. As we grow, and we learn to rely more on our own internal feedback than on external circumstances to tell us if we’re on the right path, it becomes easier to make the distinction, but initially it’s all about a willingness to wonder, and question whether we’ve been interpreting life the right way.

There’s something redemptive about this process. By its nature, it’s a chance to show ourselves grace, because if we understand why we feel the way we do, and what wounds or disappointments underly it, we can see ourselves more clearly, and value everything that we brought to the table, regardless of the outcome.

One night, later that year, I climbed into my car in the Target parking lot, and a woman across the row caught my eye as she loaded her minivan. She was probably my age, and I guessed she had several kids based on the quantities of diapers and goldfish she was loading in the back. As I drove away, I thought about how when I got home, I would log on to get some work done, and then get up the next day and go into an office where it felt like nothing was ever going to change. There in the darkness, I finally admitted to myself that I wanted to be the woman with the minivan. My life looked different, but maybe that didn’t define me. Maybe it was okay to want what I wanted. And I realized, I had learned to let myself. 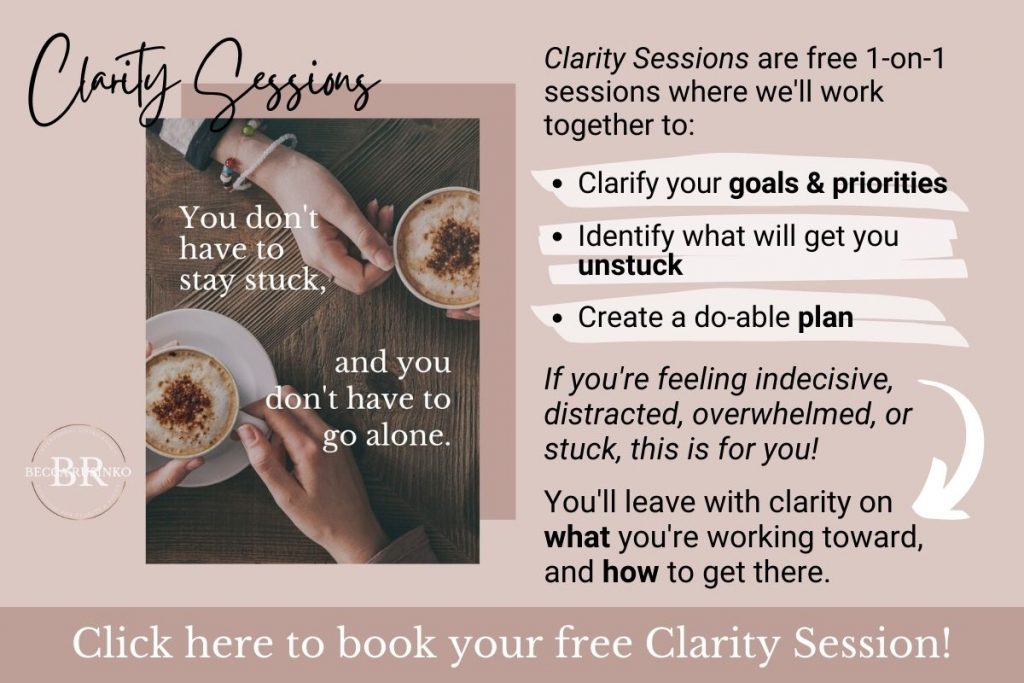