The story of my friendship with Kelly is nothing short of redemptive, and not just because Kelly has this insane beauty about her and I tend to consider myself phenomenally uncool, but because it was so very unexpected, so very unlikely, and so very essential to bringing my heart back to light.

I didn’t have a lot of friends growing up. I changed cities when I married Stephen, and I wanted it to be a fresh start, but I found myself holding back. Even though I had this gnawing desire to develop friendships, my heart had gone offline, and I could never manage to go past surface-level. I would flit in and out of my husband’s social circles, not so much oblivious to how amazing the people in them were, but completely unaware of myself. I felt totally unworthy of their attention and was certain if they got to know me, they would get sick of me. I stayed small and quiet and rarely ventured deeper.

And then, in the midst of this isolation and floundering, there was Kelly. We met in the cube-farm, the most beige setting you could imagine, but she brought beauty and laughter and fresh air. She’s the kind of beautiful that feels unattainable, but she also has this grace about her that makes everyone feel at home. As soon as you meet her, you feel like instant friends, and as we got to know one another, it seemed ridiculous to question whether we were friends, but of course I did.  In some ways, I imagine asking a new friend to hang out one-on-one is a lot like asking someone on a first date. I wanted to get to know her better, but I couldn’t get up the nerve to ask her to hang out. It seemed far too risky. What would I say? What would we talk about? What if she didn’t like me?

A few months into our friendship, Stephen had an emergency appendectomy. Normally I would never have told anyone at work, but he and I were sharing a car at the time and I had to leave to pick him up and bring him to urgent care. Kelly had hugged me tight before I left, and told me everything would be OK, but I was still surprised when she texted late that night, asking how we were doing, and offering to come up to the hospital to wait with me. It had been a long time since I had one of those “middle-of-the-night” friends, but I remember thinking, “oh my gosh, this person is the real deal.” Little by little, she proved herself, and I began to believe we could stay friends regardless of where life took us. 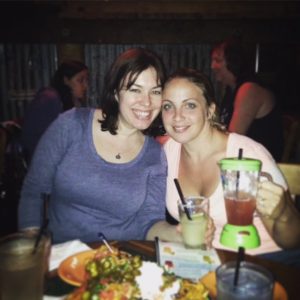 This isn’t just a story about long-awaited friendship. I read my journal recently from that season, and nearly every bit of it was darkness. I know for certain that season held stories of fledgling friendship and an awakening heart, but the pages were filled with stories of the people who let me down, or took advantage of me, or filled my days with their own negativity. This amazing person had come into my life, in a season when I’d been absolutely craving friendship, but I had barely a mention of her because I was so consumed with all that was wrong. I don’t want to be that way.

I want to notice the beauty here and now so I can appreciate it. I want to be the person who expresses that appreciation, both in person and on the pages of my writing. I don’t want to be so dependent on circumstances to make me happy.

I want to focus on the fun memories. I used to invite the girls from work over to my house, and I can picture Kelly in my kitchen, trying to make a batch of frozen sangria in the blender. I’d ducked out of the room at the critical moment when she was trying to separate the blender from its base, and came back to see her hoisting the whole contraption over her glass, base and all, desperate for that sangria-y goodness, with this “who, me?” look on her face that cracked me up. We’d guessed horribly wrong on the fruit combo, and the sangria was terrible, but none of us cared. There were comedy nights and game nights, and the time we made a playboy bunny for my boss’s door, complete with a glitter-red bowtie.

I can’t remember where we were going the night she turned toward me and asked, “can we just be best friends?” but it was the perfect picture, really, the city skyline all lit up, twinkling bright and beautiful in the darkness, reflecting this bright and beautiful friendship that had blossomed in the dark. In the middle of the darkest months when I felt the most abandoned and alone, God gave me a best friend. The first I’d had in many years. Wasn’t it kind and brilliant of God to do that for me?

These are the memories I wish I’d captured.