I’ve been running awfully close to the edge. It’s that familiar feeling of being spread so thin, and nothing getting the time or attention that I want to put into it. I woke up at 3am Monday morning, a million details running through my mind. The thoughts came insistent and persistent, loud enough to let me know sleep wouldn’t be returning immediately, so rather than toss and turn, I got up to write. Kylie curled up on the couch next to me, and I sat there in the dark and slipped into memories the way you’d slip into a warm bath: toes first, both feet, full self, letting it surround you, changing what you feel, what you hear. Changing your perspective. Mostly I thought about the experiences that have made me better, and how I’ve lost sight of many of the things I’ve learned along the way. I thought of all the soul-work I did this spring, and how much of that hard-won wisdom seems to have slipped away. Maybe I wasn’t intentional enough. Maybe I’m just tired. Maybe I’m still missing something.

And then… I heard Kylie’s stomach growl, and realized I hadn’t fed my dogs the night before, and I. Felt. Awful. It’s those perfectionistic tendencies, banging on the door again. What I should have done was reminded myself that it’s a very small piece of a very large puzzle where my dogs are well-fed (too well-fed according to the vet) and well-loved and crazy-happy, but I had a hard time letting go. I saw it as a sign that I was a wreck, and that it was affecting everyone around me. I was jumping to all kinds of conclusions, when all I really needed to do was take a half-step back. Within 20 minutes, they’d both eaten and were curled up next to me, asleep once again, more than OK.

This is what happens when I live too close to the edge. It’s not just the perfectionism I see starting to creep back in. My patience has been wearing thin. I’m back to struggling with boundaries. I’ve completely forgotten how to pick my battles, a mis-guided attempt at boundaries, I suppose. It is, for me at least, a graceless way of living. It starts, though, with that crazy voice that says I have to get it all perfect. It starts with how I treat myself, how I think of myself, and how I see my role in this world.

You see, the kindest people, the most patient people, the most compassionate people, they have a whole lot of grace for themselves. You have to be willing to stand inside the chaos, and be connected to it, and let go of the need to explain it all. You have to be OK with being uncomfortable sometimes, with being judged, or misunderstood, or talked about behind your back. It’s a tall order, but if you can do it, if you can find the ease within the effort, you will find the grace for both yourself and 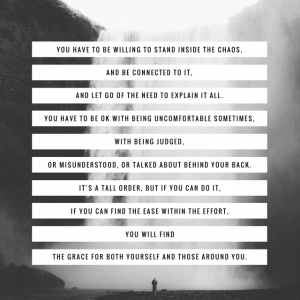 those around you. If you are going to live kindness and patience and compassion, you simply cannot try to control the world – whether through arrogance or anxiety – because the world is messy, and flawed, and you have to be very comfortable embracing that reality.

A few days later, I experienced one of those significant days, the kind where one way or another, you will not be the same after. I’d made some gutsy moves, and had gone way out on a limb, and I woke up feeling the weight of the day. I’d tried to remain positive, but the result was very much not what I’d hoped for, and more than disappointment or discouragement, it was pure sadness that filled my veins. I thought, though, that I would fall apart, but I didn’t. Instead, I was a rock star of self-compassion.  I prayed and I rested and I wrote. I did yoga, and took a hot shower, and reminded myself over and over that this is not the end. Every move felt poignant, driven not by the sadness, nor to drive it out, but overlaid with acceptance and peace, and more than anything, love, and the reminder that I am not alone. Layers of grace.

“So this is my prayer: that your love will flourish and that you will not only love much but well.” Philippians 1:9

Yes, there are things I have forgotten, but it’s in the living that we truly learn. Experience is often hard-won. It takes the two-dimensional knowledge we heard one time, and bit by bit, pounds and pulls and forms those ideas into a deep, profound, three-dimensional library of wisdom from which to draw. It sculpts ridges and curves, adds texture, color and richness, and gives weight and heft to what was once merely a collection of lines on a page. The significant meaning of each lesson moves surely and steadily from head to heart, until it becomes part of who we are. For today, for me, this can be summed up with one line:

Nothing on my to-do list is my highest mission. 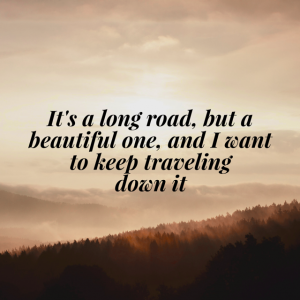 It was a mixed week. Some wins, some losses, and that’s OK, that’s why I’m here. Because it’s a long road, but a beautiful one, and I want to keep traveling down it. Let go of the need for instant gratification, it’s only going to hold you back. Just because you don’t see dynamite results on day one doesn’t mean you’re not on the right path. It means you’re normal. You’re starting. You’re building. You’re going out on a limb. Keep going. Keep learning. Keep trying new things.

1 thought on “Layers of Grace”